One of the highly enjoyable tasks of brand name development is researching multiple disciplines in search of words and concepts. On one such exploration, I encountered the word “moonshot”, a term that originated during the Apollo 11 space launch to describe the act or procedure of launching a spacecraft to the moon.

Since that time, the word has accrued an additional meaning. It is now used to describe a highly imaginative, innovative, and groundbreaking project with little or no expectation of immediate profit. 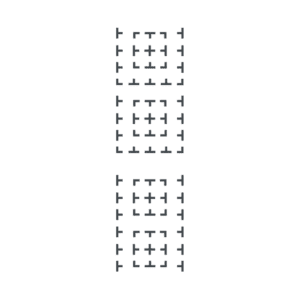 Solt wrote: “It has not been possible since the Renaissance to write a convincing sonnet on the moon. Looking at the moon photographs in The New York Times, it occurred to me that since the scientist’s symbols for marking off areas on the moon’s surface were presented five to a line and the lines could be added up to fourteen, a visual sonnet could be made of them. The poem is intended as a spoof of an outmoded form of poetry and as a statement of the problem of the concrete poet’s search of valid new forms.”

Moonshot is a fabulous word: dreamy and romantic, swift and strong. In two short syllables it evokes aspiration, discovery, and adventure. Whether a descriptor for a kind of visionary technology or the title of a groundbreaking poem, the word is as powerful as the projects and poem it titles.

Margaret, the Founder/Chief Creative of River + Wolf, has been developing names for global companies, products, and services for more than fifteen years. In addition, she has written on the art of brand naming or been quoted as a naming thought leader in many publications, among them Forbes, Fast Company, AdAge, NBC, the Huffington Post, The Next Web, Robotics Business Review, and the New York Times, to mention a few. Margaret is also active in naming education. Toward that end, she launched the NOD (names of distinction) gallery in January, and has been delivering a series of lectures and workshops on naming, most recently at WeWork and The Hivery in Marin Country, California and at Cinquieme Sens and L'Institut Français de la Mode in Paris, France.